2007 was a year of real things. A real job. A real engagement. A real apartment. No longer the starry-eyed grad student in the heavily-subsidized apartment, I spent the winter laying low and saving money for a place to live. I wanted to stay on the Upper West Side, or return to the Village, or maybe find something in the trendier Lower East Side that still had good subway access to the office.

Alas, I had not won the lottery. Prices since 2003 were on their meteoric rise (that has only partially leveled off today). That same studio apartment that I had gotten for $1,200 a month on Waverly Place was on the market again–but for $2,400. My first “real” job since leaving academia was generous (to my mind), but not that generous. And the cut to a broker that most New Yorkers take as given seemed like a huge hit as well, regardless of how much the apartment cost.

So I did what a lot of New Yorkers do, I trolled Craigslist looking for that perfect place in that great location, that is probably just a scam anyway, but it doesn’t hurt to dream, right?

And I found it.

A listing for a bedroom in a two-bedroom apartment, in a recently-converted building in the Financial District. It’s proximity to the former World Trade Center–then a very large hole in the ground–meant that the prices were not has high as any building that nicely-appointed would be anywhere else in the city. I met the person who was moving out and had put up the listing, her roommate who was staying there, and saw the apartment. I signed two days later, as soon as I could put the deposit together.

The neighborhood was not always easy, the Financial District tended to empty out pretty thoroughly after work, but I enjoyed the empty streets. The noise from the construction of the new World Trade Center was often difficult, but it was also exciting to see a part of the city transform on such a grand scale. And we had our share of adventures. But all I had to do was cross the street to walk along the lovely, quiet esplanade along Battery Park City. I cannot count how many long walks along the river I took, though one which ended in a proposal to the backdrop of fireworks over the Statue of Liberty, of course, always stands out.

The building was a soaring, neo-Gothic tower designed by Cass Gilbert, the architect of my favorite building in New York, the Woolworth Tower. Topped with a copper mansard roof, and encircled with gargoyles, it’s almost a fairy-tale castle in the middle of the glass skyscrapers Downtown. Battered, but not beaten, by the disaster of September 11, 2001, the building’s solid, they-don’t-make-them-like-they-used-to construction meant that it withstood days of fires when surrounding buildings fell. It’s a building rich with history, detail, and charm. Right down to the morning doorman, Louis, who would always make sure your day started off right with a kind word and a spin of the revolving door.

Cass Gilbert had already been a favorite architect of mine, largely due to my love of the Woolworth Tower, but also because he too has a somewhat strange connection to Michigan. I once again felt like I was coming home–a home that tied together my past and my present. This was perfect. This was New York the way I had fallen in love with the city, all over again. It was a place I was happy to come home to when I had the best roommate of all. Happier to come home to when my fiancée moved in, following my roommate’s move to her fiancé’s apartment. And happiest to come to as a married couple, starting to plan where our story would take us next.

The address was simple, almost hiding the beauty and fullness of the building behind it. And in that simplicity, I found some of that old magic that thrilled me about this city, and the excitement of having a place here that was mine. 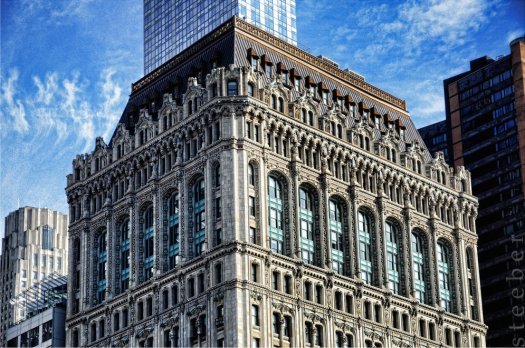 One Reply to “Heading Downtown”